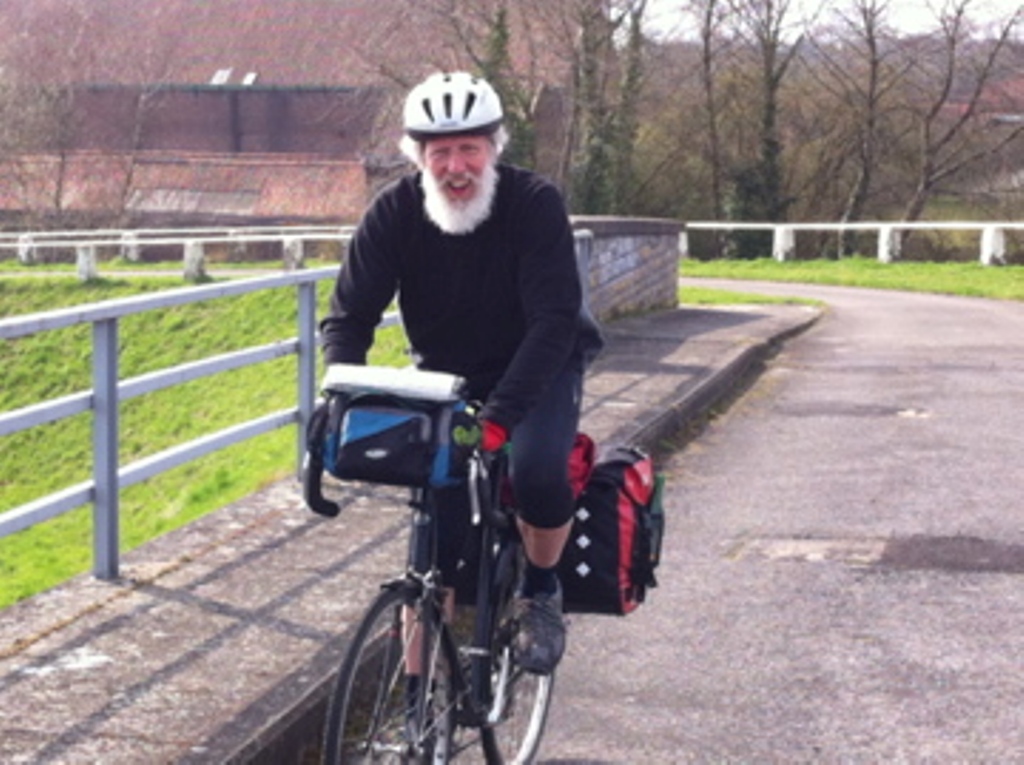 First, why am I cycling from Plymouth to Paris?

One answer is that I was at the SW Green Party General Meeting in Plymouth on 17 September, when Roger stood up and announced “Ricky, Ewan and I are pedalling to the Paris COP21 Climate Conference“. Oliver, my local Somerset colleague, and I looked at each other quizzically – had Roger just volunteered me for a cycle ride to Paris? In November?

Turns out there was a different Euan, who mis-spells his name with a “u”.

But, I like cycle touring, and secondly, doing whatever I can to help us take common responsibility for climate stewardship has been a personal passion since before my University days. The first Intergovernmental Panel on Climate Change (IPCC) report was published in 1990, my first year of studying undergraduate physics. That same year Jeremy Leggett, former Big Oil geologist, authored Global Warming: The Greenpeace Report.

Paris is not that far away, and there are few hills along the way. This bike has travelled a fair few miles with me…

… Around the same time, I had a wonderful and beloved bike stolen from an underground bike locker. Raleigh Competition, beautiful black, with elaborate gold butting. My Uncle, who worked for Raleigh in Nottingham, had sourced it for me. From the parts bin, he built this new lightweight 531. He rode the London to Brighton with her, and I simply added some wider swept Italian handlebars.

We have travelled together to the Scottish Highlands three times, on the sleeper from Euston to Fort William. Over to the the Golden Road on Harris, and Calanais on Lewis once. Altnaharra (the coldest place in Britain) once. Assynt and Suilven twice.

In 2003, we climbed Bealach-na-Ba (admittedly only with a day pannier).

“This is it: the Holy Grail, the toughest and wildest climb in Britain. Anything you have read or been told about this amazing road is likely to be true. Believe the hype.”

We kept forward momentum all of the the way up the stream bed to the hairpin. The descent into Applecross was the best ride ever – well sighted single-track Scottish road, fuelled by uphill Scottish endorphins. They are natural, and they work!

Along with all people of goodwill, we are shocked and saddened by the horrific events which took place in Paris on Friday night.

However, we are also still committed and determined to cycle to Paris as originally planned, to support the goal of a successful climate agreement between world leaders. A binding and meaningful agreement on cutting carbon needs to be achieved if we are not to condemn billions of people to irreversible climate change and all the attendant impacts that that will bring. END_OF_DOCUMENT_TOKEN_TO_BE_REPLACED

First of all, we are still going to Paris, despite the events of Friday night, as you will have read from the announcement from Climate Vision. And apologies to those of you who might have tuned into Radio Cornwall expecting to hear Luci and me being interviewed by Donna Birrell – again, the events in Paris overtook us all.

On the eve of our departure, my bags are packed, and I am listening to the wind and rain blowing around outside. Hopefully, it will blow through tonight and our departure will not be too wind-blasted! Anyway, I am looking forward to getting under way and to meeting our various well-wishers as we head for Plymouth. I think the Cornish leg of the journey will be the more challenging with all those hills; from St Malo to Paris is less hilly but further, but we have factored in enough time to allow for possible delays.

Just had an email from Helena from Truro who is in India at the moment and she tells me that the children at the school she is at are all switched onto the Climate Change situation. Good to be able to share with them in this pilgrimage of hope!

Next update – once we are on the journey!

The train from Liskeard was 10 mins late, but I got to the church on time:-)

Excellent crowd in the cathedral, Birt Biscoe and Julian Germain spoke well, Luci introduced Euan & I and we said a few words. Canon Linda blessed our bikes and the Archbishop Benson children sang for us. Chef Sanjay produced supermarket waste soup, which was delicious and helped power us on our way – cycling down the aisle of Cathedral – how cool is that? END_OF_DOCUMENT_TOKEN_TO_BE_REPLACED

After a full breakfast at the Molesworth Arms, your intrepid cyclists headed out of Wadebridge along the Camel Trail to Bodmin. There were patches of blue in the sky and birds sang as we followed the old Southern Railway trackbed alongside the River Camel, thinking that this part of the journey would have been even easier if the trains still ran! Arriving in Bodmin with time to spare before our next engagement we had a cup of tea at the aptly-named Folly Cafe. END_OF_DOCUMENT_TOKEN_TO_BE_REPLACED

so day three dawns nice and mizzly as Cornish November days should. Waste a lot of time uploading pics which takes ages so just time to bung them all in a gallery on here before time to leave for Looe.

Its a lovely ride down the Looe valley – in summertime – but not all downhill by any means.

The lane between St.Keyne and Sandplace is proof of Cornwall Council’s stated policy (at a recent planning forum) of “managed decline” of the road network. Rutted, pohtholed,muddy, leaf litter,twigs and small branches strewn over the surface.

However the council have introduced a splendid new bit of cycle infrastructure – the built-in bike wash! A photo will follow, but basically it consists of a 2 foot deep lake the whole width of the lane at the top of the worst bit so that your wheels, chain, chainset,gears and feet get a thorough wash.

There will eventually be a photo to illustrate this but on the lane between Tideford and Lantallack there is a genuine 1 in 4 steep hill road sign. None of your 25% namby pamby rubbish. Four step forward, on step up. Euan and I tested it and can vouch for the fact that it is certainly not rideable – especially with Euan’s “man gears” (52-42 front and 12-24 rear with an extra 32tooth granny ring – I haven’t had gears like that since I was well the other side of 40), but my 28 front 34 rear lowest gear wouldn’t hack it. Still we had a nice chat with Laurence Reed on Radio Cornwall at the top.